Almost everything now has a day or a week dedicated to it in the calendar to either promote awareness to a cause, appreciate a specific thing or mark an historic anniversary, and August is no different. For August holds ‘Afternoon Tea Week’, which is held between the 9th – 15th. Now of course we don’t need an official week to allow ourselves to take afternoon tea, however next week allows us to enjoy this with no guilt…As it’s ‘official’.

So to mark this highly important, quintessentially English event in the calendar with the respect and appreciation it deserves, this month’s article is dedicated to the historic event of the afternoon tea. Get ready for some tasty inspiration, with a few modern twists. 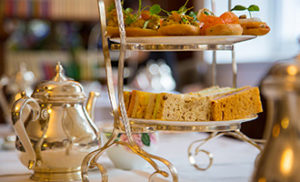 So where did the afternoon tea concept come from? You may not have heard of the name Anna Maria Russell, but it’s this lady that the history books proclaim to be responsible for the ‘invention’ of the afternoon tea concept as we know it today. Back in 1840, Anna was actually the Duchess of Bedford and as was common in those days, many households only served two meals a day, breakfast and dinner. As dinner was often served around 8pm that left a very long gap between meals, and as would happen with most people, this gap caused an unhappy rumbling stomach for Anna so she started asking for a tray of tea, bread and butter and cake to be bought to her room during the latter part of the afternoon. Over time this became a habit and latterly became a more social event as she invited friends to attend this ‘afternoon tea’.

Years later in around 1880, afternoon tea had become a very social affair amongst high society. The occasion became a popular one, and a great excuse to show off the beautiful dresses of the time amongst the upper classes. So from Anna’s afternoon hunger pangs, came the renowned ritual of small sandwiches, cake, and tea that we now call ‘afternoon tea’. 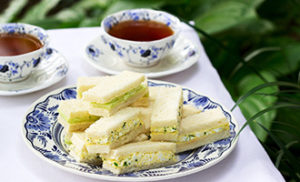 Although there is no set menu as such for the afternoon tea, it traditionally comprises of small, dainty, finger like sandwiches (often with crusts removed) and a collection of sweet treats and cakes. Often it is the scone with its serving of clotted cream and jam that takes centre stage in more modern menus, but let’s focus on the sandwiches first…

The old classics tend to be most popular such as ham and mustard, cheese and tomato, egg and cress, tuna and cucumber and smoked salmon, but why not get creative here and go for the more unexpected sandwich fillings? Try mixing Delamere Dairy Spreadable Goats’ Cheese with finely chopped celery, spring onion and carrot into a bowl. Then add tinned or freshly cooked tuna, and mix together for a truly tasty sandwich filling. Roasted vegetables such as shallots, butternut squash and peppers can all form a great sandwich filling. Mix with Delamere Dairy’s Goats’ Cheese Log, a truly scrumptious combination for any afternoon tea! Butternut squash is loaded with vital nutrients including potassium (helpful for lowering blood pressure), and zeaxanthin and lutein, which are two powerful antioxidants that are essential for eye health and vision. 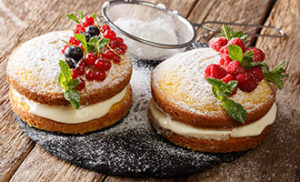 Most people would agree that the most important part of an afternoon tea are the sweet treats, and that the sandwiches are secondary. So with that in mind, let’s turn our minds to cakes! Now afternoon teas are not necessarily meant to be the healthiest of meals, but that doesn’t mean we can’t make some healthier additions to the sweet and cake selection. Remember there are many recipes available now that allow cakes to be fat-free, by replacing the butter that is usually present in most cakes, with vegetables. Yes I did say vegetables! Now not all vegetables are suitable here, but there are many cake recipes available online where courgettes, beetroot, carrot, avocado, pumpkin and sweet potato are the basis of the cake, and no butter needed. Not only is this a fantastic way of enjoying sweet treats in a much healthier way, but it’s also a great ploy to get children to eat more vegetables. Cake can then officially be classed as one of your five a day, so it’s a win win for all involved! 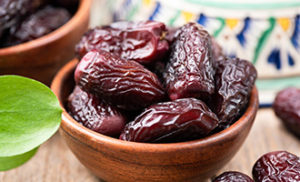 More traditional based cakes often served at afternoon tea are the classic Victorian sponge cake, a fruit cake, and of course the classic scone. All cakes taste better when they are homemade (well unless you are terrible at baking!), so remember that most recipes can reduce their sugar content, especially if you are adding dried fruit or some type of jam. This is one small change will help to decrease your sugar intake, and make your afternoon tea that little bit healthier. Medjool dates are a natural sweetener – although dates are very sweet and contain fructose they have a relatively low glycaemic index (GI). Foods with a low glycaemic index create less of an increase/spike in sugar levels in the blood stream after their consumption. Studies have concluded that the consumption of dates by healthy or diabetic individuals does not result in significant blood sugar spikes and therefore can be used as a good sugar substitute, but like anything, eaten in moderation. Making a date puree is a great way of making a sugar substitute that can be used to substitute white or brown sugar in pretty much any recipe using a 1:1 ratio. Soak some Medjool dates in hot water (just enough water to cover all the dates) for 5-10 minutes. Once they are super soft, puree the dates and a small amount of the liquid in a liquidizer to form your date puree. You can use the left over ‘date water’ as a sweetener for smoothies, or in other recipes where you want to reduce the sugar. Used in cakes it will also help to make sure your cakes remain moist and not dry and crumbly as some can become quite quickly! 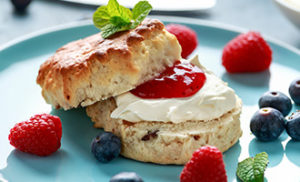 Now to the centre piece of the afternoon tea – scones! Scones are certainly incredibly easy to make, and can also easily be frozen if they don’t all end up in your stomach first. A little twist to the usual scone recipe is to add yogurt instead of milk to the recipe to allow for a lovely fluffy and light scone. Use Delamare Dairy Plain Goats’ Yogurt and don’t forget to add a squeeze of lemon juice to the yogurt before combining with the flour and butter scone mixture. Lemon juice sours the yogurt (you can also add the lemon to milk if you are using milk instead), and makes it better for baking, as it acts as a leavening agent so helps the scones rise in the oven.

Hopefully with the inspiration provided above, giving a little modern and healthier twist to the traditional afternoon tea, you have all you need to enjoy this week’s Afternoon Tea Week. All we need now is some sunshine…