After the challenges of the last 12 months, it is highly likely that your brain is feeling a little frazzled. As brain awareness week falls in March (16th – 22nd), it therefore seems fitting to put the spotlight on this vital organ and see how we can improve our brain health with the foods we eat. 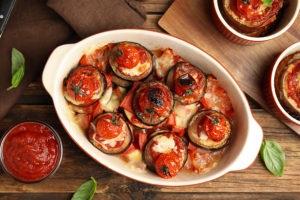 These purple vegetables are part of the deadly nightshade family along with tomatoes and peppers, yet are far less frequently eaten than the others. Aubergines are very rich in antioxidants, specifically one called Nasunin, found in the aubergine skin. Nasunin has been shown to be specifically beneficial for brain health as it has been shown to help protect the fats found in brain cell membranes and not many of us can afford to lose too many of those! 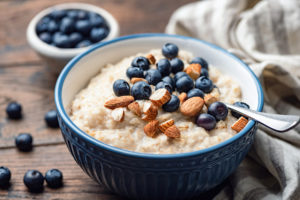 Another fantastic purple food and one that should be another addition to the brain menu are blueberries. These little berries are very rich in antioxidants. Antioxidants help protect the body from oxidative stress and free radical damage, which contributes to aging and general inflammation. Research shows that blueberries have neuroprotective benefits and can help reduce age related cognitive decline and may even delay short term memory loss. The antioxidants found in blueberries have also been shown to accumulate in the brain itself, having the positive effect of improving communication between the brain cells. So blueberry brain is something we could all benefit from! 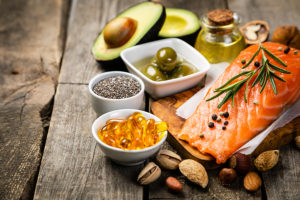 Around 60% of the human brain is fat and half of that fat is omega 3 fats, so it’s fair to say that this fat is going to be vital in a healthy functioning brain. This type of fat is needed for brain and nerve cell development and if we don’t get enough of this essential, healthy fat, learning and memory can be impaired and depression and low mood is more likely. Not only that, but some studies have shown that consuming Omega 3 fats regularly may help slow down age related decline and reduce the risk of Alzheimer’s disease.

Consuming Omega 3 fatty acids when young is also very important, as a diet high in this has been shown to improve IQ levels too. So your brain menu should include salmon, fresh tuna, sardines, mackerel, anchovies and trout as well as nuts and seeds. 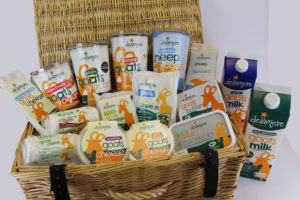 Tyrosine is an amino acid (a building block of proteins), which has been shown to improve alertness and energy levels, so whether you are young or old it will keep you firing on all cylinders. Tyrosine is also an essential component for the production of many important brain chemicals called neurotransmitters, and some research suggests that increasing Tyrosine consumption increases these neurotransmitters which in turn may help improve memory as well as our performance and handling in stressful situations.

Tyrosine is found in foods rich in protein, the highest sources of which are animal based foods such as eggs, pork, milk, cottage cheese and chicken. This can mean that people who are vegan may have to make a more conscious effort to ensure tyrosine-rich foods are part of their diet by consuming avocados, peanuts and bananas, but the highest source of plant based Tyrosine is found in pumpkin leaves and cooked mustard greens. Delamere Dairy goats’ milk is a great source of Tyrosine, as is hard goat’s cheese, so why not boost your levels by choosing Delamere Dairy Goat’s milk and tasty hard goat’s cheese. Your brain will thank you. 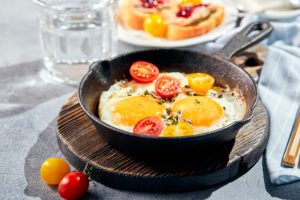 Eggs are packed full of many nutrients that are vital for brain health, two of the big ones being folate (Vitamin B12) and choline. Folate is essential for the development of a healthy nervous system and has also been shown to help reduce age related cognitive/mental decline and memory loss, which shows the importance of this vitamin at either end of the age spectrum. Folate is also good for improving mood and mental fatigue, which can commonly occur in all age ranges.

Choline is a micronutrient found in the yolks of eggs and is essential for making a neurotransmitter called Acetylcholine, which is vital for mood regulation and good memory. In fact egg yolks are one of the most concentrated sources of choline available in our diet and should certainly be on the brain menu. The versatility of eggs and ease of cooking them should appeal to the masses, yet many people still have low choline levels. Why not make an omelette, frittata, quiche, egg custard to name a few good egg-rich foods to boost your choline and folate levels.

This well-known mineral has been shown in many studies to be critical for brain power, enhanced memory and thinking skills so is an important part of the brain menu. Recent Canadian research has shown that Zinc actually plays a key role in how nerve cells communicate with each other and if we don’t get enough of it, it can cause memory problems and ‘fog head’. Zinc deficiency is actually linked directly to memory loss in people with Alzheimer’s disease.

Because of the important role that Zinc plays in general cognition and brain health, studies have also shown that in some people it can also improve symptoms of ADHD. So how can you get more zinc in your diet? Well eating beef, lamb, pumpkin seeds, dark chocolate, cashew nuts, spinach, shellfish and legumes will really help provide you with all the zinc your brain needs. 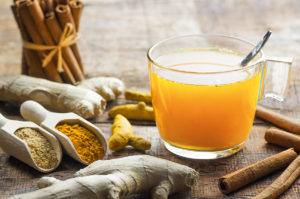 This brightly coloured spice is certainly vying for a top place for one of the world’s most medicinal spices. The research done on its huge variety of health benefits is still growing and this includes the benefits it has shown to have on brain health.

Turmeric is both a powerful anti-inflammatory and a rich source of antioxidants with most of its medicinal properties attributed to curcumin, which is the main active component in turmeric.  It has been shown in varying research to have positive effects on improving memory in people with Alzheimers’s disease, boosting serotonin and dopamine levels which are neurotransmitters vital for ensuring mood stability (low dopamine and serotonin levels lead to low mood and depression) and has also shown future promise for the potential to delay or reverse many brain diseases, especially those related to age related decline.

As the saying goes, ‘A healthy mind means a healthy body’, so if we feed our brain the right food for its development and healthy aging, then this will go a long way to ensure that our body and brain keeps firing on all cylinders for as long as possible.