How Your Diet can Help to Manage Hay Fever

Hay fever affects millions of people in the UK every single year, and in some people it can be so debilitating and trigger other more serious conditions, such as asthma, that for those that suffer it can be a really miserable time.  Allergy Awareness Week this year falls between April 26th and 30th and the focus this year is on hay fever. With Covid restrictions continuing in relation to indoor gatherings in houses, more and more people will be spending time outside and in gardens in the coming weeks and months, so this year, probably more than any other, for those who suffer with hay fever the prospect ahead is likely to be a difficult one. It’s estimated that by 2030 around 45% of the UK population will suffer with hay fever, which research shows significantly affects people’s quality of life, especially in those who suffer with it severely. 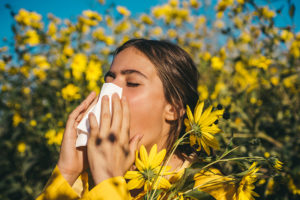 So what actually is hay fever? Also known as allergic rhinitis, hay fever is an inflammation of the nose, nasal passages, sinuses, throat and eyes, which results in the characteristic symptoms of sneezing, runny nose and itchy eyes. It occurs when pollen in the air enters our body through our nose and mouth when breathing. In people who have hay fever, the body recognises this pollen or allergen as a foreign invader and releases a chemical called histamine, which is part of the body’s natural immune defence and triggers an inflammatory response. This results in the symptoms we associate with hay fever. In some people these continued symptoms may trigger eye infections, a decline in their mental health and in asthma sufferers hay fever can lead to asthma attacks and severe breathing problems too.

So with the outdoors a continued feature in everyone’s lives at the moment, what can be done to reduce hay fever symptoms in those that suffer?

Well let’s start by talking ‘gut health’. We hear a lot about this phrase at the moment and that’s because we know that having a healthy digestive system, basically ensures that our physical and mental health will also be impacted positively. If gut health is poor, then that pretty much affects every other physiological process in our body either directly or indirectly and that includes the body’s response to certain allergies such as pollen in the case of hay fever. When we hear the words ‘gut health’, what we are really describing the bacteria that lives in the many parts of the gastrointestinal tract and the functions and balance of this bacteria within the gut.  This bacteria makes up what is called the gut microbiota or gut flora, along with billions of other microorganisms. Some recent research looking into the gut flora of people who suffered with hay fever found that hay fever sufferers had a unique gut flora. More research is now needed to understand what this actually means, but as we know the gut flora plays a big part in the immune response and the tackling of allergies, then hay fever sufferers need to ensure they have optimum gut health and this may help to reduce symptoms or indeed improve their tolerance to pollen over time. 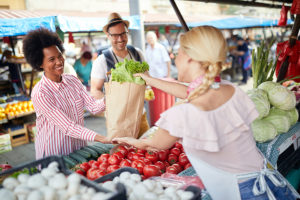 Fruits, vegetables and pulses are some of the best foods you can eat to keep your gut flora healthy. This is because they are all especially high in fibre and fibre is a critical component for gut health because it promotes the growth and flourishment of gut bacteria in particular Bifidobacteria. Bifidobacteria is a group of bacteria called probiotics, which are essential in helping protect the body from harmful bacteria that can cause illness and disease. Reduced amounts of Bifidobacteria in the stomach and intestines has been linked to many diseases and a reduction in immune function. Some research has also shown that on supplementation of this specific bacteria group, along with another called Lactobacilli, it not only helped to alleviate hay fever symptoms, but also improved the quality of life during pollen season for those who suffered with hay fever. Now I’m not promoting the use of supplementation of probiotics here, but maintaining a healthy level of these bacteria in the gut through a good and varied diet is essential! 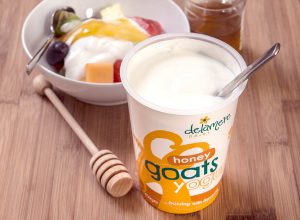 Fermented foods such as yogurt, sauerkraut, kefir, kimchi, sourdough and tempeh are excellent for maintaining, restoring and improving the health of the gut. These foods have undergone a process of fermentation that results in these foods being a rich source of probiotics, which positively impact gut health. Lactobacilli (the bacteria mentioned above, which showed a positive impact on hay fever sufferers) is found in most of these fermented foods and makes up part of your gut flora. Studies have shown that certain Lactobacilli strains help improve the body’s resistance to infection and also show that people who eat yogurt appear to have more Lactobacilli in their intestines than non-yogurt eaters. So if you are not a yogurt eater and you are a hay fever sufferer then I highly suggest you prescribe yourself a daily yogurt! Delamere Dairy have some great flavours of goats’ yogurts to offer including, honey, plain and strawberry so there is a flavour to suit all occasions and every taste bud! 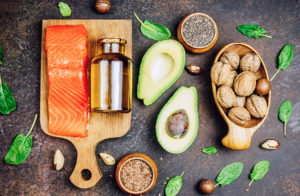 Hay fever also brings with it inflammation. Inflammation of the nasal passages, eyes and airways so reducing the level of inflammation in your body through foods that have been shown to offer anti-inflammatory properties can be helpful here. Foods such as those high in Omega 3 fatty acids (oily fish & nuts), ginger, turmeric, berries, basil and foods high in vitamin E such as avocado, nut butters, butternut squash, spinach all have active ingredients shown to reduce inflammation so certainly worth adding to your regular diet during pollen season. 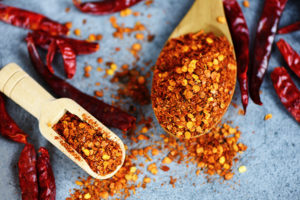 Hay fever sufferers are usually very familiar with anti-histamines, which can often be consumed avidly throughout pollen season. In hay fever sufferers, the pollen we breathe in causes an increase in histamine levels in the body, hence why anti-histamines are taken. However there are also some foods that are natural antihistamines, which are useful to consume regularly before and during pollen season. These include foods high in vitamin C,  such as citrus fruits, berries, kiwis, broccoli and the highest source comes from fresh chillies (mild or hot) and peppers (especially yellow), which can easily be added to a variety of recipes. Onions should also be on the daily menu as they contain an active compound called Quercetin, which has been shown to offer anti-allergic properties as well as helping to inhibit histamine release, both of which are needed in hay fever cases. Apples, red grapes, honey and raspberries also contain quercetin, but onions are by far the highest source of it. 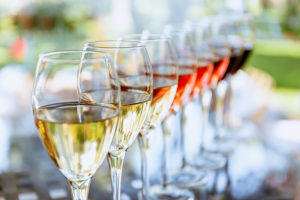 Just as some foods contain antihistamine affects, others actually contain histamine and these foods are best avoided or reduced, before and during hay fever season so as not to further increase histamine levels in the body. Over ripe fruit and vegetables contain high levels of histamine as histamine levels increase as these foods ripen. Dried fruit, shellfish, processed meat, and alcohol are also high in histamine and spinach, tomatoes and bananas can actually stimulate the release of histamine in the body, so again are best avoided or reduced in the diet especially if your symptoms are severe. 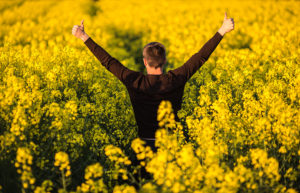 So if you are a hay fever sufferer, either already suffering with symptoms or facing the coming weeks with trepidation, take a look at your diet and make some changes from the advice above. Wear sun glasses (ideally wrap around ones) to reduce pollen entering the eyes, apply Vaseline to the tip of your nose to ‘catch’ some pollen, and if you have long hair tie it up to prevent the pollen on your hair being on your face.

And remember; don’t forget to tuck into a daily Delamere Dairy yogurt to boost your gut flora with Lactobacilli!