Food for the Heart

In case you didn’t know, February is National Heart Month, which is very in keeping seeing as it’s also the month of Valentines. So there couldn’t be a better time to show your heart, or even someone else’s, some love, by feeding it all the things that will cherish it by keeping it healthy and making it feel appreciated for all the hard work it does! 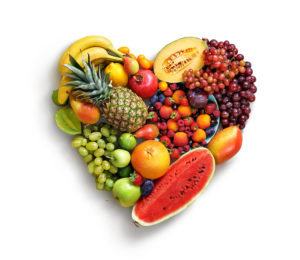 In an average lifetime, your heart will beat more than 2.5 billion times. That’s a huge amount of work for something that weighs only 8-10 ounces and is roughly the same size as your fist. Your heart can therefore be summed up as ‘an essential piece of kit’, but with Coronary Heart Disease (CHD) being the  single biggest killer in the UK and the leading cause of death worldwide, we need to start improving the health of this vital organ. One easy way that you can improve your cardiovascular health is through a good, healthy diet and knowing which specific foods have shown to be of benefit in this area is a good starting point. So in honour of National Heart Month, let’s look at how nutrition can optimise your heart health and help keep it beating as long as possible.

Garlic has been used by humans for over 7000 years and is one of the earliest recorded plants used by humans in the treatment of disease and the maintenance of health. Despite its small size, garlic is packed full of components that have shown to have a huge variety of health benefits and it is now widely recognised for its therapeutic use in the treatment and prevention of cardiovascular disease. For those people suffering with high blood pressure, this little plant can have remarkable effects if eaten regularly and similarly taking a supplement of aged garlic has also shown positive effects on lowering blood pressure.  Garlic has also shown to be helpful in the prevention of atherosclerosis, the fatty plaque build-up that can occur in the arteries. People who consume garlic, generally show a reduced build-up of this fatty plaque in the arteries, which of course is a very good thing as this can lead to cardiovascular disease. 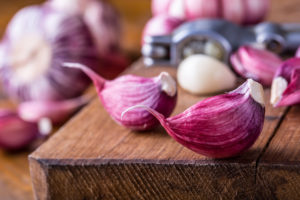 According to Heart UK, 6 out of 10 people have raised or abnormal cholesterol levels now, which of course can increase the risk of suffering heart attacks and strokes. Garlic can be your friend here too. In fact one large, recent research study concluded that for people with slightly elevated cholesterol levels, garlic should be considered as a possible alternative option, with a higher safety profile than conventional cholesterol-lowering medication. This however is not the case for people with high cholesterol levels and it has been suggested that garlic may not have the same therapeutic benefits in everyone and that some people react more positively to it than others in term of its cardiovascular effects. There is certainly a lot to gain by including this little bulb in your diet and consuming it in its raw form where possible.

Pomegranates may not be the first food that comes to mind when you think of cardiovascular protective foods, but you shouldn’t judge a book, or a fruit, by its cover! This fruit really is ancient, even having biblical references, and was used historically to heal many ailments. These little super fruits are gaining a vast amount of recognition for their heart protective properties and should definitely be a fruit that graces your weekly fruit bowl! These fruits have a high polyphenolic content and very high antioxidant levels, both of which make it a heart friendly fruit. Studies have shown that people who supplement their diets with pomegranate juice, seemed to improve some key indicators of cardiovascular health such as improving blood pressure and seemingly offering protection for aging arteries.

This brightly coloured yellow spice, is not often used in cooking in this country, but hopefully after reading this that will change. The main bioactive component of turmeric is a polyphenol called curcumin and it is this component that gives turmeric such a range of therapeutic benefits, including those associated with heart health.  One of the primary causes of stroke and heart attacks is atherosclerosis, the hardening and plaque build-up in the arteries. In fact, a very high percentage of all heart related deaths are attributed to atherosclerosis, so trying to prevent this is a key part of maintaining heart health. So how can Turmeric help this? Well turmeric has been shown to have anti-atherosclerotic properties, meaning it can potentially help prevent the build-up of plaque in the arteries. Curcumin has also shown to have positive effects on cholesterol levels by lowering LDL (bad cholesterol). 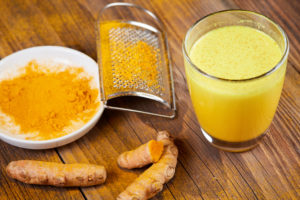 One potent therapeutic effect of curcumin, is its anti-inflammatory properties, which again could potentially be helpful in the fight against heart disease and its onset. Although it isn’t proven that inflammation causes cardiovascular disease, inflammation is common for heart disease and stroke patients. It would therefore make sense to keep inflammation levels in the body as low as possible and this can be helped by making sure foods with anti-inflammatory effects are consumed daily and that includes turmeric.

Let’s face it, most people love chocolate and we certainly don’t need an excuse to eat it, however I’m about to give you one! Believe it or not, cocoa has shown positive effects on cardiovascular health, so not only is chocolate good for the soul, it’s now also good for your heart too, provided you pick the one with a high cocoa content. When it comes to chocolate, it is not all created equally and when it comes to heart health, only the best quality dark chocolate will suffice.

Cocoa came to Europe in the 16th century, however it was around long before that in other parts of the world. The proposed health benefits of cocoa are mainly attributable to the high flavonoid content, which have been shown to decrease the risk of death caused by coronary heart disease.

A small amount of dark chocolate daily has shown to have anti-hypertensive (blood pressure lowering) effects, but only in people who had mildly high blood pressure. A daily dose of high cocoa chocolate, has also shown to help improve levels of HDL (good cholesterol) by as much as 14%. Improvement of general coronary vascular function has also been seen with the consumption of cocoa, so just in case you needed an additional reason to reach for the chocolate there it is. The Incas considered cocoa the ‘drink of the gods’  so why not make your own wonderful milky cocoa drink using Delamere Dairy’s goats’ milk. For a richer fuller, drink choose Delamere Dairy’s whole goats’ milk, or for a lighter option opt for the skimmed milk variety. Heat your milk and then stir in an inch square piece of good quality chocolate, which has 80% or more cocoa content and stir in until melted. Enjoy!!

Speaking of milk and dairy, the saturated fat in milk and dairy products has, up until recently, long been branded with the same negative brush as dangerous saturated fats, which are known to negatively impact on heart health.  This has now shown not to be the case at all and in actual fact, dairy fats are no longer to be regarded as culprits in the cause of heart disease. Official advice and guidelines on this will soon be changing, which exonerates dairy fats from their perceived role in causing cardiovascular disease and will declare that they do not contribute to the disease at all. Which is good news for all Delamere Dairy product lovers! 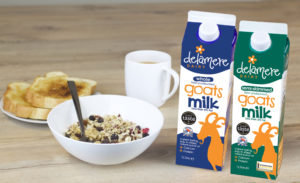 Ever heard the expression ‘a tomato a day keeps the heart doctor away’? No thought not, but it does have some truth! Tomatoes contain a variety of nutrients including lycopene, beta-carotene, potassium, vitamin C, folate, flavonoids, and vitamin E, all of which have proven health benefits and this includes benefits for the heart too!

Lycopene has been shown to increase blood flow, which is an indication of improved blood vessel function. Improved blood vessel function means a healthier cardiovascular system, which then reduces the risk of heart attack and stroke. Blood platelet function (platelets are the part of your blood involved in the clotting process) has also been shown to improve with lycopene consumption.  Some researchers suggest that one of the reasons that cardiovascular disease is low in the Mediterranean, is because of the high consumption of tomatoes there.

Nuts, in all their varieties, are a great heart friendly food and make a tasty, healthy snack choice too. A study published in the Journal of Nutrition stated that eating just 13g of nuts daily could cut your risk of a heart attack by 30% due to the high content of Omega-3 fatty acids found in nuts, so that is definitely a good reason to get the nut cracker out!

Nuts are also a great source of soluble fibre, in fact after cereals, nuts are the vegetable foods that are richest in fibre, which is one of the reasons why they are heart healthy.  A diet high in fibre improves cholesterol levels and healthy cholesterol levels helps reduce your risk of cardiovascular disease. Almonds in particular have shown to have a positive effect on lowering LDL levels (bad cholesterol).

Reducing atherosclerosis, can also be helped by nuts, especially walnuts. Walnuts are composed of about 47% polyunsaturated acids, which are healthy fats. The specific healthy fat found in walnuts in high quantities is called alpha-linoleic acid, which has been shown to reduce plaque buildup in the coronary arteries, as well as improve the general function of blood vessels. Eating just 25g of walnuts a day provides you with 90% of your omega-3 fatty acids recommended daily intake and due to the anti-inflammatory properties of omega-3, consuming walnuts has also been shown to help lower blood pressure, reduce stroke risk and prevent coronary artery disease.

There are many foods that help keep you heart healthy, but all should be eaten as part of a well-balanced diet and in moderation with other healthy foods that are essential for overall health. As the Spanish proverb goes ‘A man too busy to take care of his health is like a mechanic too busy to take care of his tools’, so make sure you look after your heart, not just in National Heart Month, but as an ongoing lifestyle change.